Through the partnership with Kiwanis Club of Liguanea, #ChristmasInRiverton toy drive and Future Hope charity senior citizens from the Liguanea communities; children in Riverton City and neighbouring communities as well as homeless individuals in the corporate area received some much needed Christmas cheer, in the form of care packages, toys, meals and hygiene packages.

Alexisse Chin-Tufail, co-founder of #ChristmasInRivertonCity toy drive, in welcoming JMMB team back as a partner for a second time, said, “We are happy for this partnership with JMMB and our other corporate and individual donors that have helped to not just sustain this effort, for seven years, but allowed us to extend the love and Christmas cheer to more children, growing from 200 children to this year catering to more than 800 children. The support is indeed heartening as companies and individuals have not allowed the challenges of COVID-19, to steal the true meaning and spirit of Christmas. 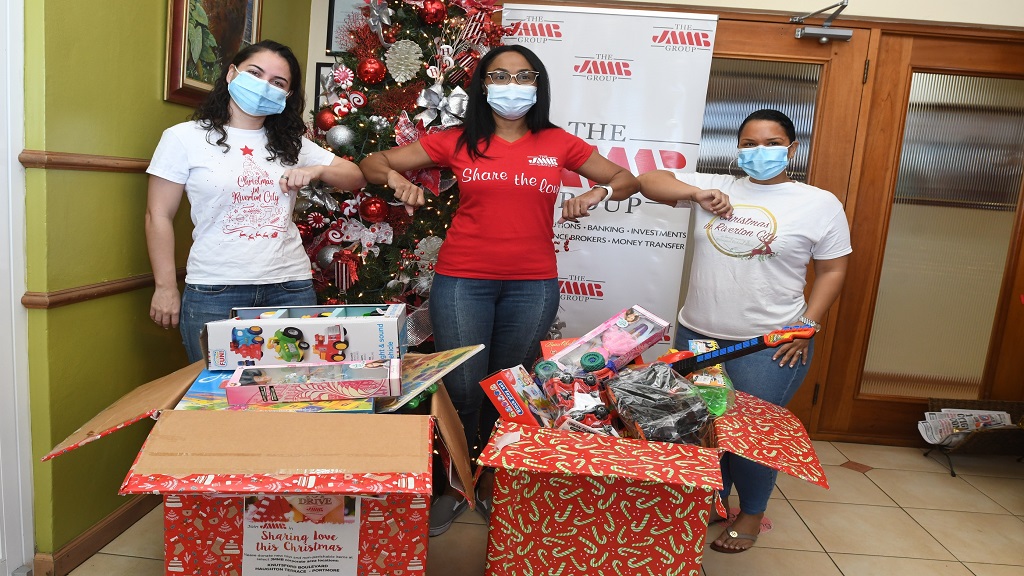 Fornia Young, general manager, client partnership at JMMB Investments (centre) shares in an elbow bump with the co-founders of #ChristmaInRiverton toy drive, Joanna Marzouca (left) and Alexisse Chin-Tufail during the handover of toys to the charity at the JMMB Group head office.

She added, “With this support, we are further encouraged and look forward to touching the lives of even more children more next year.”

Group chief marketing officer at JMMB, Kerry-Ann Stimpson, outlined, “In recognising the challenges that many individuals have faced during this year, especially the elderly and children, we wanted to ensure that we lent our support to organisations like these, to bolster their efforts and ensure that the often overlooked members of our society receive some good cheer.” The CMO added, “Through partnerships like these we can accomplish so much more and touch more lives. This initiative goes beyond just offering tangible tokens, we are also sharing hope and spreading joy to each person, and not allowing the challenges of the year to dampen our Christmas spirit.” 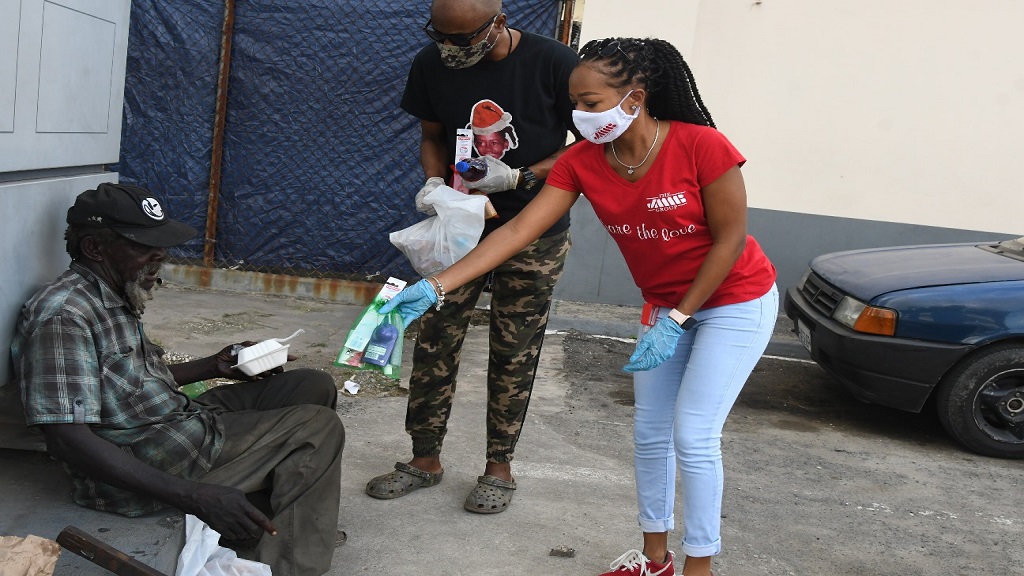 Personal portfolio manager at JMMB, Shinelle Simpson (right) joins Andre Garel, co-organizer of Future Hope charity, an annual Christmas Day feeding programme for the indigent and homeless, to spread some Christmas cheer to this man seated along the roadway in the Half Way Tree area.

In addition to joining forces with these charities, the JMMB Joan Duncan Foundation led a #CanYouPIF social media campaign to encourage a ripple effect of kindness and love across communities and the country, at this time and even beyond the Christmas season. In leading by example the Foundation donated funds towards the Future Hope charity. As part of the campaign, individuals were challenged to tag the JMMB Joan Duncan Foundation with the #CanYouPIF, for each act of kindness done, thereafter the Foundation would donate J$1000 up to a maximum of $200,000, over the two-week period.

Samantha Brandt, co-organiser of Future Hope, in commending the JMMB team and other corporate entities such as National Bakery, for being on board this year, notes, “We welcome the effort as we are able to give even more to the homeless and indigent during our annual Christmas treat, which has grown from feeding 50-60 persons, to now providing meals and hygiene packages to 150 persons. In explaining more about the charity Brandt shared, the initiative was birth out of the desire by the late sister (Simone) of co-organiser Andre Garel, to provide Christmas meals to a few homeless persons in need, and at her passing, he decided to honour her memory by keeping the initiative alive and paying love forward.

Previously, JMMB also joined forces with other charities, namely: the Feeding of the 5000,…

Salesforce, the cloud-computing company, announced in September that it had reached net-zero greenhouse gas emissions, even when counting its...

This report underscores how a group of people focused on a mission can accomplish a more sustainable and equitable...

OPINION – A CSR perspective on the Amendment of the Gaming Law

By Macau Institute for Corporate Social Responsibility in Greater China  Note: This articles comes in response to the Macau SAR Government’s public...

Planet-positive should be profit-positive – New Statesman

shutterstock / rangizzz As sustainability claims and corporate net-zero pledges proliferate, it is increasingly difficult for us to distinguish...

The Path to a Livable Future

For the past several decades, Noam Chomsky has been one of the most forceful and persuasive voices confronting injustice,...

Notice to the Extraordinary General Meeting

Amnesty tries to force Israeli intelligence firm ‘out of the shadows’

Results of placing of existing shares in PVA TePla