Rosatom’s portfolio of foreign orders remains at the level of over USD250 billion and, in the 10-year perspective, “hovers around” USD140 billion, Director General Alexey Likhachov said yesterday during his meeting with Russian Prime Minister Mikhail Mishustin. The two men discussed the results of the state corporation’s work in 2020, implementation of current projects, as well as the direction of strategic development, including green regulation and digitalisation of the economy. 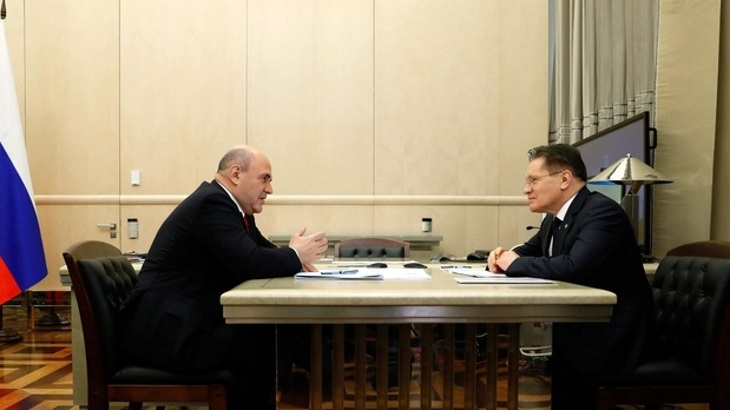 “That’s a lot of money, and I want to report to you that we have almost 100% cash execution of the budget, that we are working very carefully and responsibly with money from the state budget,” Likhachov said.

Mishustin noted that Rosatom is active in 12 countries, including Belarus where a VVER-1200 unit is being commissioned.

“It seems to me that Rosatom has gone far beyond only nuclear energy and that you are now engaged in a number of technologies more broadly,” he said. “It’s digital technology, it’s quantum computing, laser technology, and more.”

Likhachov said that, it was welcome that, “during a difficult year”, Russian Presdient Vladimir Putin had signed (in April 2020) the decree Development of equipment, technologies and scientific research in the field of atomic energy use in the Russian Federation for the period up to 2024.

“Not everything in 2020 went as we predicted and there were some difficulties,” he said. “But we did not stop any construction work and in fact we markedly increased foreign revenue.” That was thanks to assistance from Rosaviation, the border service and the Ministry of Health in moving 22,000 Rosatom employees to its construction sites in other countries.

Rosatom is working to promote nuclear energy as a low-carbon source of electricity, not only in Russia, but internationally, Likhachov said.

As part of this effort, he highlighted Russia’s joining of the United Nations Global Compact – the UN’s largest international initiative on corporate social responsibility and sustainable development.

“We are not standing still. We are working with the United Nations  and have joined the UN Global Compact and we have our own policy there. But we understand that we will not be able to manage alone, and in this sense, of course, within the framework of international negotiations, within the framework of bi and multilateral contacts, the promotion of nuclear energy as being environmentally friendly, as green, is extremely important for us.”

The transcript of their discussion is here.

In this edition of Bills-Dolphins, what sort of game should we expect? More of the same fare (historically speaking)...

Twiga Minerals Corp. is an exemplary P/PP in Tanzania

By Karl Lyimo If there ever was an exemplary public/private partnership in Tanzania in recent memory, then Twiga Minerals...

How Are Aussie Banks Performing On Social?

In some ways, banks and financial institutions have a tough road on social media. Unlike many other sectors, which...

Agenda: Business must be about more than profit and loss