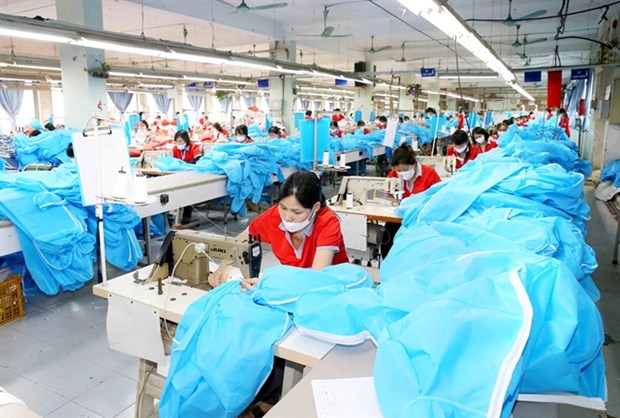 Hanoi (VNS/VNA) – State-owned
enterprises (SOEs) need to enhance their autonomy and responsibility under market mechanisms to contribute
to the growth of the economy, according to a report by the Central Institute
for Economic Management (CIEM).

Vietnam has improved the legal framework to
ensure the rights of autonomy and self-responsibility of SOEs closely following
international practices, but the legal framework is still missing many
components, according to a recent report on the autonomy and
self-responsibility under the market mechanism of SOEs conducted by
CIEM with support from the Australia-Vietnam Economic Reform
(Aus4reform) Programme.

The State still intervenes deeply
in the operation of wholly State-owned enterprises, leading to
overworked agencies that manage State capital at enterprises, while
the enterprises face many difficulties.

To enhance the autonomy and
self-responsibility of State-owned enterprises, the CIEM research team said
improving transparency is key.

SOEs should publish public reports on both
financial and non-financial information according to international standards.
Strengthening financial discipline for State-owned enterprises is another
important recommendation.

In addition, the transformation of an SOE
into a joint-stock company is the most important measure to improve enterprise
autonomy.

Phan Duc Hieu, CIEM deputy director, said the
“fair treatment” of State enterprises is a requirement in a market
economy, along with the implementation of commitments on international economic
integration.

During 35 years of reform, Vietnamese laws
have been amended so that State enterprises are increasingly empowered
with more autonomy and responsibility.

According to Pham Duc Trung, Head of the
CIEM’s Department of Enterprise Reform and Development Research, the Enterprise
Law stipulates that a State-owned enterprise has the same rights and
obligations as an enterprise of all economic sectors, including business
autonomy, contract, and possession, use and disposition of property.

However, institutions and management
mechanisms have failed to create full autonomy and self-responsibility for
State enterprises. State management agencies decide many issues in the
corporate administration of SOEs. That can weaken the motivation of
enterprises’ leaders to act in the best interests of
the enterprise and its shareholders.

Besides that, many SOEs have fallen into
dissolution or bankruptcy, but are still kept alive via State support.

Le Duy Binh, CEO of Economica Vietnam, said
SOEs wanted to be like private enterprises with full autonomy, but the
operation of SOEs was often dependent on the State management agency that
represents the owner.

Le Tien Truong, Chairman of the Vietnam National
Textile and Garment Group (Vinatex), said SOEs must comply with the Law on
management and use of State capital to invest in production and business.

Before approving decisions within the
authority of a board of directors, the representative of State capital in the
enterprise must consult the State agency that manages State capital at SOEs,
then convene a meeting of the board of directors to approve those decisions for
them to be executed. It can take one or two months for the State agency to
respond.

When Vinatex was a wholly State-owned
enterprise, it had to wait for a governing body to give it directions. The
situation has continued even though Vinatex became a joint-stock company with
48 per cent of the charter capital belonging to non-State shareholders in 2015,
so this process will make it difficult for the group (Vinatex), according to
Truong.

“For a private company, a shareholder
only votes on the company’s strategic issues. Meanwhile, at an SOE, the
shareholder must also vote on…

Top CSR initiatives in Sikkim - The CSR Journal   Sikkim is a border state in the North East...

Get instant alerts when news breaks on your stocks. Claim your 1-week free trial to StreetInsider Premium here. UNITED...

Business with a purpose

LAHORE: Rising prices and record corporate profits point towards the greedy mindset of most of our businessmen. Their contributions...

In light of global capital market investors’ growing interest in the topic of responsible investments, the Israel Securities Authority...

Ready or not, the era of corporate political responsibility is upon us

Refocus on sustainability as you look to the new year