Fiona Munshi reflects on her time at BlinkLane Consulting


After three years as a consultant with a Big Four firm in South Africa, Fiona Munshi relocated to the Netherlands and joined management consultancy BlinkLane Consulting. Two years into her role, she discusses her views on cultural differences, remote working and adjusting to her new home amid a global pandemic.

Remarking on the huge shift she experienced in early 2019, Fiona Munshi stated, “South Africa and the Netherlands are so completely different from each other – nearly opposites but I love them both!”

While obviously there are superficial differences in terms of the geographical size and weather typical to both countries, Munshi noted that the biggest contrast is in terms of culture. While people in South Africa can be “more aware of being polite,” the Dutch are renowned for their “direct” nature. 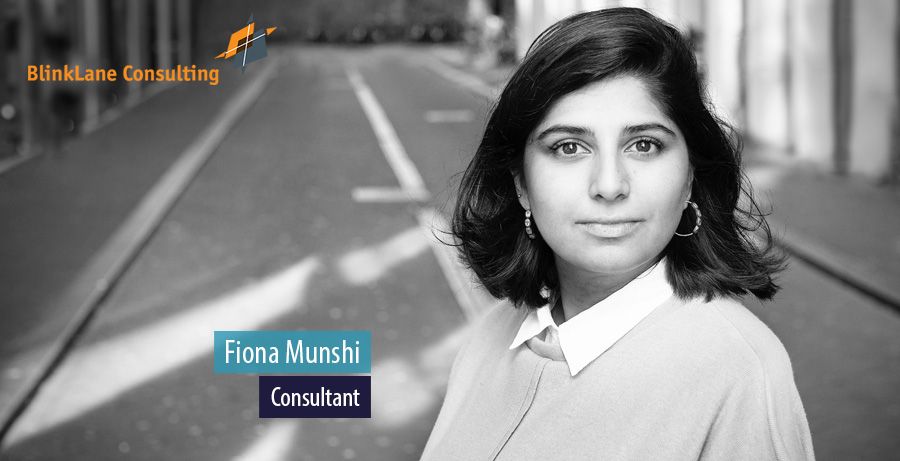 “The people are very different in the way that they communicate,” Munshi explained. “The Dutch are more direct. Neither is wrong but was just something to get used to and also start to appreciate.”

Having commenced her career as a Junior Consultant with KPMG in South Africa, late 2018 saw Munshi decide the time was right for a change. Moving to the Netherlands in January 2019, she initially spent seven months as a Business Analyst for Philips, before a position with BlinkLane Consulting caught her eye.

Expanding on what drew her to her current employer, Munshi said, “I liked the fact that the work was not only reports and PowerPoint slides but really understanding the client challenges and collaborating with them to come to a new way of working and helping them kickstart it. There is a real focus on people in the work that we do. I also liked that it was a small company with a flat structure! A place I knew I would fit well into. Of course, it was something I had to adjust to but my intuition was right!”

Initially, Munshi found it quite a contrast to the kind of work she was used to. The firm’s flat hierarchy was a challenge initially, as she was used to a more hierarchical organisation – but thanks to her colleagues, it was a hurdle she has long since overcome, and “will never be able to go back.”

“I am in awe of the people I work with,” Munshi noted. “They are incredibly smart, driven and always there to give you a helping hand. We are able to work together professionally and also be ourselves and relax together when the work day ends. I appreciate their knowledge, the role they play in my own development, and all the laughs of course.”

The non-hierarchical nature of the firm is important when it comes to fostering an entrepreneurial spirit across the team. According to Munshi, anyone with an idea or something they want to work on “can really just go for it,” whether it is an idea for a client or an idea for BlinkLane Consulting.

At the same time, the diverse and complex assignments at BlinkLane have also tested her, and pushed her to learn faster on the job – with “some really interesting clients and setting up transformations in many different parts of these organisations.”

Last year, Munshi’s ability to settle into her new job were undeniably disrupted by the global pandemic. In particular, as with so many other people across all industries, the initial move to remote interaction was not always smooth.

“Remote working has not come without its challenges,” Munshi admitted. “The connection we have with each other and with our clients is less. However, being able to work from home does allow for more time to be able to focus on work which needs “thinking” time without distraction. It would be ideal to have a hybrid of the two.”

Looking ahead, Munshi is confident that BlinkLane Consulting’s adaptability means it will be able to expand its innovative offering to organisations in the post-pandemic world. In particular, having already helped…

Read More:Fiona Munshi reflects on her time at BlinkLane Consulting

Can you imagine a 125 km long line of garbage? This is what the quantity of e-waste generated in...

Grief sharing on social networks lets us structure the feelings that earlier filled our minds without any outlet. Staying...

NEW DELHI: Realty firm Ansal Housing on Friday said that the company has faced multiple ransomware attacks on its...

Corporate leaders support social speak out on social and political issues. getty If you have followed the news even...

The Importance Of Having An IT Security Policy In Place – Media, Telecoms, IT,

How Saudi nonprofit Alnahda blazed a trail in women’s empowerment